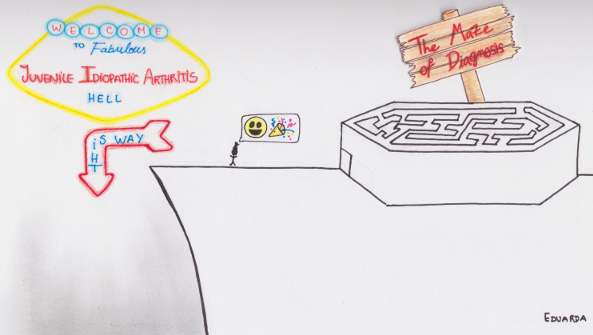 Hi! In the last post I said I was going to tell you the story of how they found out I had arthritis, so here it goes…

No one knows for how long I’ve had JIA, they estimate that it started when I was 4 years old when I had a special fever a lot of children with JIA have. The problem is that, at the time, no one remembered it could be arthritis.
When I was younger I would trip (nothing special), and my ankle, knee or wrist would hurt for a while but, again, who though this could be unusual? Children trip and get hurt all the time! I was just considered fragile.

When I was 16, things started to get serious… I became unable to stretch my fourth and middle finger on both hands and had to have surgery. At this point you would think that someone finally figured it out, but noooo! They blamed it on stress even though my blood work and a biopsy came back positive for arthritis.

So, for the next 4 years, I was basically considered crazy. Everyone kept telling me to relax because it’s not normal for stress to give you constant tendinitis, sacroiliitis, hip and other joint pain.

When did everything change? Well, it all started when, one day, I was unable to put any weight on my leg and my wrist hurt so much that I almost cried during a lecture. It was time to see a new rheumatologist.

And… (drum roll) I was finally diagnosed!!! I felt so relieved! I was so happy! For the week after I almost cried every time someone doubted I had JIA…

In the weeks that followed I had to go through various MRIs, repeated all the blood work and got used to swallowing large pills. Now I’m being followed by a great rheumatologist and we are currently trying to get my JIA under control. I’m confident we’ll be able to do it! I just have to be patient while we try different approaches.

(I can’t accept all the credit for the cartoon above, since it is the result from a brainstorm session with my father. He has great ideas and deserves to get credit for them.)

Meet Eduarda and other friendly folk on Arthur’s Place Social, our Facebook Group

Eduarda Martins, who wrote this blog, was diagnosed with JIA aged 20 even though she's had it since she was very young. Now 21, she decided she should join Arthur’s Place blog in order to help spread awareness and show people what it's like living with arthritis. Eduarda's journey has involved lots of NSAIDs, some DMARDs and a right hand surgery. She's currently trying to survive med school and arthritis. She has 2 very fluffy Persian cats.