Happy Arthritis Birthday to Me 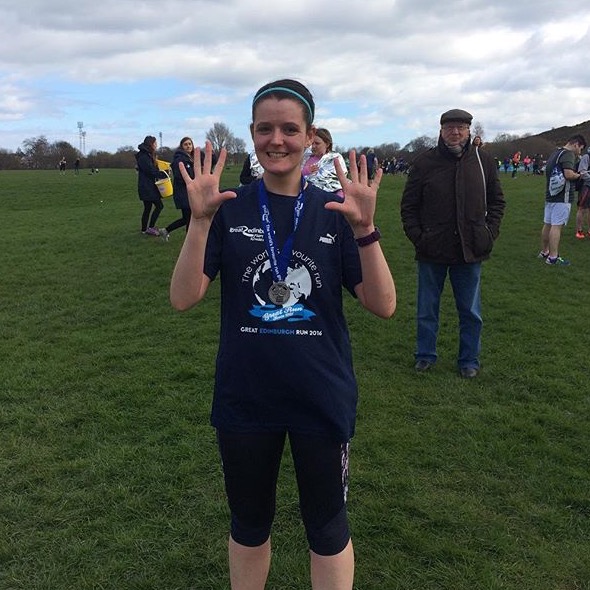 For this blog post, I’m gonna do a bit of reminiscing about this past year. I’m hoping that writing everything down and putting it out there in the universe takes a bit of the sadness I feel away from me and allows me to move on. I write this as a young woman who misses running and is still struggling to come to terms with her new body.

April marks the start of what I think of as the beginning of my arthritis. April 2016 was the month I regard as both the time I was the fittest in my entire life, but also the start of the worst year of my entire life. It was to be the last month where I could run, and generally do anything, without being in pain.

This would be the first time I felt physically aware of a change in my body. After racing 10km or over, it wasn’t unusual for me to be a bit stiff in the hips, however this usually disappeared quite quickly. After the 10 mile race however, it didn’t disappear. I remember going to lunch afterwards with my boyfriend and his sister to celebrate my run and I was really struggling to walk with them. My hips were really stiff and painful, and I started to feel a discomfort in my left foot, but I put this down to running too hard, too fast, and maybe wearing incorrect socks. I love a good excuse.

With hindsight, though, this right here was the moment I believe I ‘developed’ arthritis. The moment it presented itself to me. On a beautiful sunny day, having achieved one of the strongest races of my life, in one of my favourite cities, my life was about to change forever.

Over the following week, I was to remain a bit stiff but felt strong enough to attend my first ever Parkrun on the 23rd April. I set another 5km personal best. What can I say, I loved smashing my own records, I was on a roll! Hail and wind didn’t stop me from venturing out that cold Saturday morning, but unbeknownst to me, it was to be my last run for 5 months. In the following week, the pain in my left foot intensified to a point where I could apply no pressure to it. About a week later I noticed the second toe was double the width. From this moment, it would be only 10 weeks before I was signed
off work, totally unable to walk.

Hindsight is both a blessing and a curse. All those little niggles I’d felt from January 2016 but shrugged off as nothing. Were they warning signs? Did I cause this to myself because of the running? If I’d have done swimming or cycling instead, would any of this ever had happened to me? It’s hard to not let these thoughts consume, and on down days, I really do think of the ‘what ifs’, even though I know I shouldn’t.

I will always consider myself as a runner. Since April 2016 I have been fortunate enough that I have managed to run on 17 occasions, most of which were very short distances, with differing levels of pain and success. Some, around summer 2016 time, felt almost normal. Others, towards the latter part of the year, have become very difficult.

I feel that the strength is still there, hidden beneath the surface, but my body takes weeks to recover. I shouldn’t beat myself up too much though. One of these runs was my first half marathon, The Great North Run, which I had a charity place for and felt like I couldn’t pull out of. It was to be mildly successfully, in that I got round the course in one piece and felt very little pain afterwards compared to what I had expected. I still get sad when I drive past runners though. It takes a lot of strength for me not to cry for who I used to be.

Due to changes in my medication, I’m yet to feel strong like I was in summer last year, but I am lucky/unlucky enough to have a charity place for Arthritis Research UK for the London Marathon. I was due to run it this year, but given how on some days right now I struggle to climb a flight of stairs, I have deferred my place until 2018. Can I run it? Who knows. I have a commitment to raise the required sponsorship money so that alone should spur me on to see what my body is capable of. I
believe I can run it. Why? Because I have to believe. Because I’m still not ready to accept the fact that I might not be able to run it. Because I want to take this opportunity whilst I’m still relatively able to. Because I’m not ready to quit just yet. Because I’m still not ready to admit I may not be the person I used to be again.

Somewhere over the year, my Instagram bio has changed to say ‘Psoriatic Arthritis. Middle Distance Runner.’ I don’t know when I made this change, but subconsciously I suppose, my arthritis has become the number one thing in my life. It may seem rather trivial, but as an overthinker, I can’t help but wonder when this shift happened, and why I allowed it to. I am not my arthritis.

This month has been hard for me so far, and at my time of writing, we’re only 10 days in!! It’s hard not to reminisce and feel a bit sad when thinking about this time last year.

Today I have decided to not let my arthritis be the number one thing in my life. Today, I am going to change my description around. ‘Rebecca. Middle Distance Runner. Psoriatic Arthritis.’

Meet Rebecca and other friendly folk on Arthur’s Place Social, our Facebook Group

Rebecca is a late twenty something runner with Psoriatic Arthritis, who will be running the 2018 London Marathon. A full time worker and a part time student with the Open University, she enjoys reading, sport, and cats. A Disney fanatic, Baloo from The Jungle Book is her idol. She lives in Aberdeen with her boyfriend