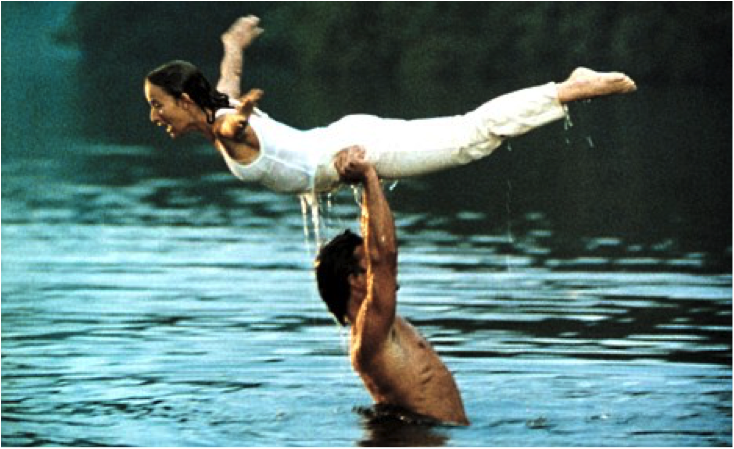 As I mentioned in a previous post, I found out recently that I was entitled to some physiotherapy sessions under the government healthcare system in Australia (Medicare) and was super excited to start!

After checking the range of movement in my knees and elbows and other joints, the physiotherapist admitted that traditional physiotherapy sessions wouldn’t actually do much good. He said that I could use my free visits for hydrotherapy or clinical pilates though, and I decided to give both a shot. I started with a group hydrotherapy session the following week.

Having not had anything to do with gyms, personal trainers, exercise in any form really, I wasn’t sure what to expect. In my mind it was either like a drill sergeant barking orders at me flailing around in the pool, or something like the scene in ‘Dirty Dancing’ where they practice the lift in the river…! Both options were equally terrifying.

Fortunately it was nothing like either. It was held in a small pool closed off to other swimmers, and 5 other people were in the class. Most were ‘senior citizens’ but there was one other guy my age – it seemed rude to ask right off the bat ‘what’s wrong with you?’ since I hate that question too! Everyone had been there before so they all knew what to do, each person had their own set of exercises that they went through, and the instructor, who was in the pool with us, went round to each person to check on them.

Some of the exercises used flotation devices in the same way you’d use weights in a gym, for example floaty dumb-bells that you had to push under the water rather than lift high in the air. There were even floaties you had to Velcro to your ankles and do leg raises in – I was having trouble getting the second one on, as it involved hopping around in waist-deep water trying to get my legs (which don’t bend) close enough to my arms (which don’t straighten), without drowning myself in the process.

When all else failed, I resorted to humour, saying to the instructor ‘So…this isn’t supposed to be the hardest part of the exercise, is it?’ and got no reaction at all! ‘Erm, no. You just Velcro them like this…’ Ugh. Sense of humour anyone?

Overall, hydrotherapy was quite fun though – I felt like I’d done exercise, but not so much that I was exhausted and sore. Because you’re weightless in the water all your joints seem to move a bit more smoothly, but with the floatation devices and water resistance you can get a bit of a workout.

For people as uncoordinated as me, the fact that there’s no chance of dropping a dumb-bell on your foot is a bonus, although I did let go of a pool-noodle at the wrong time and have it hit me in the face. (Still not even a grin from the instructor…I’m going to prescribe a few ‘smile-crunches’ for him…!)

Meet Hannah and other friendly folk on Arthur’s Place Social, our Facebook Group

Hannah is a PhD candidate living in Melbourne, Australia.   Her arthritic joints enjoy a round of 'flare roulette', and include her knees, elbows, neck, one ankle and one big toe.  She is working her way through the menu of available biologics, and sports some cute keyhole scars from a bilateral arthroscopic synovectomy on her knees.  She likes travelling, old books, sewing, dinosaurs and chocolate.