Clinical Pilates for Dummies (that’s me…) 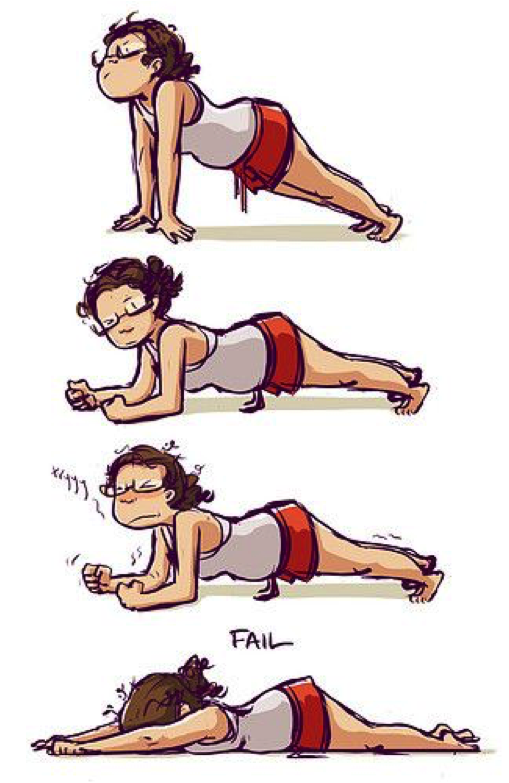 As I mentioned in a previous post, my physiotherapist had recommended I try out both hydrotherapy and clinical pilates, which were offered by the clinic, and see which agreed with me the most.

At the mention of clinical pilates I started off on a bit of a rant, saying that I couldn’t think of anything worse than being in a room of Lycra-clad bendy people getting into all these impossible poses, while I struggle to get close enough to my shoelaces to tie them. THIS he laughed at (having shown no signs of a sense of humour up until now…!), and explained that for the first few sessions it would just be me and him, and he would tailor the exercises and we would work out what I could and couldn’t do together.

Also, I would not have to get on the floor (in my mind pilates was like yoga for some reason), which was a relief because for me while getting down to the floor is more like a premeditated fall, getting back up involves so much huffing and puffing that I think it counts as my exercise for a whole month alone.

Most of the exercises are on machines that look a bit like an industrial kind of 4-poster bed – you sit or lie on the bed, and these bars and loops attach to the top with springs which you pull down with your arms or legs for example. You can add resistance by adding more springs. Other exercises, like sit-ups, were done just on the top of the bed.

I was doing ok at the pulling and pushing, but I realized quite quickly that my instructor and I – as a non-sporting person – were speaking different languages at times:

Instructor: Ok, so with one you’ll really feel it working your glutes.
Me: …
Instructor: In your butt.
Me: Ohhhh okay. Yep got that.

So I now have ‘biceps’ and ‘quads’ where I used to have ‘arms’ and ‘legs’. We also did work on my ‘core’. Up until now, I thought my ‘core’ was just the bit my arms and legs were attached to. But apparently there’s muscles in there. And mine are really out of shape! Ugh. But I think that will help my posture, which is another thing I wanted to work on.

After the 45-minute session, I felt sufficiently stretched and sanctimonious to think that counted as a ‘work-out’. I can say that I didn’t hate it, which from someone who doesn’t like sports is actually an amazing review. 😉

I liked doing hydrotherapy too, but I’m going to continue with clinical pilates for reasons that are actually unrelated to the actual exercise… I think getting in and out of the pool is going to be less appealing when the weather gets cooler, and with pilates I can move from individual sessions with the trainer, to small group sessions, to independent sessions when I just come in by myself (this is also, of course, cheaper).

I know pilates won’t cure my arthritis, but if it means that my whole body is stronger and more flexible, that can start to make up for the weaknesses in other areas. It also feels so good to be DOING something, rather than just sitting around on my ‘glutes’ all the time…

Meet Hannah and other friendly folk on Arthur’s Place Social, our Facebook Group

Hannah is a PhD candidate living in Melbourne, Australia.   Her arthritic joints enjoy a round of 'flare roulette', and include her knees, elbows, neck, one ankle and one big toe.  She is working her way through the menu of available biologics, and sports some cute keyhole scars from a bilateral arthroscopic synovectomy on her knees.  She likes travelling, old books, sewing, dinosaurs and chocolate.