Personal growth is important, but let’s not push ourselves so hard

Photo by Bich Tran from Pexels

We’re a couple of days in to the new year, I’ve thoroughly broken in my annual pair of new pyjamas (thanks Granny!) and the cat has just about recovered from the NYE fireworks. And, of course, January has already seen an avalanche of resolutions, protein powder sales and countless declarations that this year is going to be ‘even better’.

For some people the concept of having a new start is exciting. There’s a sense that we’re wiping the slate and, as any writer will tell you, there’s something very appealing about a blank page. Lots of people see the new year as a motivator to try something new or get on with what they’ve been putting off, and that can be great. But within that promise there’s also expectation and pressure from all around.

Now, feeling that pressure is definitely not just a Spoonie thing, or even just a new year thing. But in January the bar does tend to be raised, even after social media war over who can have the most fun on New Year’s Eve has died down. There’s a sense that everything is now moving forward, and you’d better be onboard or get left behind.

What about when you have a chronic illness?

Unfortunately, the concept of leaving the bad behind you is a bit tricky when you have a chronic illness. My arthritis isn’t going away any time soon, and that fact alone can seem extra depressing when everyone else is talking about a clean slate.
Add New Year’s resolutions to the mix and suddenly the limitations that arthritis puts on you are very apparent, and while Theo from college is perfectly entitled to announce his plans to run five marathons this year, it isn’t exactly making you feel better. 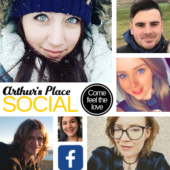 It’s okay to not feel 100% enthusiastic about the new year, in fact I know some people who prefer to ignore it all together. But, but, BUT: our *ahem* misguided immune systems, or any illness, don’t have to ruin the possibilities all together.
Who says we can’t try something new, or do something better? I’m only 21, so I know there’s still a lot of things I want to experience and, as much as I hate to admit it, I probably still have a bit of growing up left to do.

So, without further ado…

So maybe they don’t quite pass as ‘resolutions’, but here are my New Year’s affirmations. *
*Or at least my affirmations for the first few weeks, until my life inevitably moves on and I have to think of some new ones.

1. Goals are better than resolutions
Resolutions: they’re so easy to break that people are surprised if you manage to keep them for more than a month. Not only does the motivation wear off as fast as the new year hype (i.e. pretty fast), in my experience they’re often not very compatible with chronic illness.

Why? Because resolutions are often just dressed-up rules. They involve doing X a certain amount of times a week, or never doing Y – you know the kind of thing. Because of that, resolutions tend to require consistency, and that’s something I’ve always struggled with, especially when I’m in a flare.

Say you set a resolution to go for a walk three times a week – sounds reasonable enough for a young person, right? Say it’s all going well for the first couple of months, you’ve cut your carbon footprint and have basically become the Forest Gump of walking. But then a flare kicks in.

You persevere for a bit, not wanting to give up on activity altogether, but one day you get home from work and you’re so sore you just can’t face going on your walk. It’s Sunday, you’ve only been on two walks this week, your resolution is broken. But you’re a tough cookie, so once your condition is a bit more under control you get back on it. But maybe you re-start too soon, and next thing you know you’re back in flare.

Come the end of the year, and despite having done a brilliant job of walking a lot more often, you still look back at your resolution to walk three times a week and feel like you’ve failed because you didn’t manage it every week.

I’m not going to tell you to give up on making changes; as young people it’s really good for us to want to grow and learn new things and having arthritis shouldn’t stop us. But resolutions, for me at least, just aren’t flexible enough.

Goals seem like a useful alternative. Setting a goal gives me something to work towards over the year, instead of a rule to follow. It may seem pedantic, but in practice it takes a lot of the pressure off while still being encouraging. Compare “don’t spend any spare money” to “save enough money to go to Hawaii”; which one sounds more appealing?

2. A bad start is not the end of the world

You may have started a shiny new calendar but, as much as we’d like it to, life doesn’t always fit into a straightforward time schedule, and neither do our bodies. We aren’t always feeling shiny on January 1st.

As fun as the holiday season can be, it can also be very stressful when you have a chronic illness. There is pressure to go out, eat and drink a lot, work overtime and be appropriately merry. Don’t get me wrong, I love Christmas and was happy to do all of the above, but it can leave me feeling a bit burnt out by the end of the month.

Alternatively, you might start the year feeling fantastically motivated, then find things start to go wrong. Maybe your first appointment of the year doesn’t go so well, or you try a new hobby and find that it’s just too much for your body to handle.
Yes, it is frustrating. But like all man-made time markers, the concept of a new year is, at the end of the day, made up. In fact, in a lot of places the calendar is completely different and its not a new year at all.

Don’t worry, I’m not about to go all ‘time is meaningless’ on you, but it is worth remembering that January 1st is just another day, and what you do in the coming weeks isn’t necessarily going to determine the rest of your year. Which leads to affirmation number three.

3. You don’t have to start now just because it’s a new year

As humans we like things to line up: the year starts, therefore I start. It’s logical, it’s neat, it’s motivating. Except it doesn’t always align with reality.

My arthritis has never been one for convenient timing (as it proved quite roundly last year when it flared just before my final exams) and it’s been a bit of an achey December. I probably won’t be alone in that either; it is still winter after all, the season of extra-stiff joints and catching every cold within a ten-mile radius.

So maybe now really isn’t the best time to begin an intense exercise regime or pledge to start riding your bike everywhere. Personally, I’ve always been sporty and this year I really want to regain the muscle mass I lost to illness in the last year. But my joints really aren’t up for learning how to powerlift yet, so for now I’m going to stick with what I know, exercise-wise.

For what it’s worth, in Middle Ages Europe New Year wasn’t until March anyway, so going by that we all have plenty of time. If anyone asks you, just tell them you’re being traditional.

4. You don’t need to do anything radical

I’m all for personal growth, but it’s very important not to get too caught up in your own expectations, or those of people around you.

If you’ve grown up with chronic illness, you’ll likely have been told that you’ll never be able to do X, Y or Z. I’ve always hated that, which is why this hasn’t been your standard ‘you don’t need to change at all’ piece. If you want to change for yourself, if you want to improve at your hobbies, learn something new, or just read a few more books, then you absolutely can.

I’ve come to accept that there are some things I can’t just conveniently leave in the past. Okay, maybe it’s not realistic for me to start training for a marathon, not least because my rheumatologist might actually tackle me to the ground to stop me. But that doesn’t mean I can’t find other ways to get back in to sport and do things I love.

So, change is good, and some might even say inevitable for people our age. But you don’t need to drastically alter yourself. Maybe this is my camp counsellor side talking, but you are a young human with a disabling and unpredictable disease piggy-backing, uninvited, along with you. And yet here you are, getting on with your life.

You’re doing a smashing job already, keep it up.

Personal growth is important, but let’s not push ourselves so hard was last modified: January 9th, 2020 by Izzie Clough
EXERCISEFEELINGSHEALTHY EATING