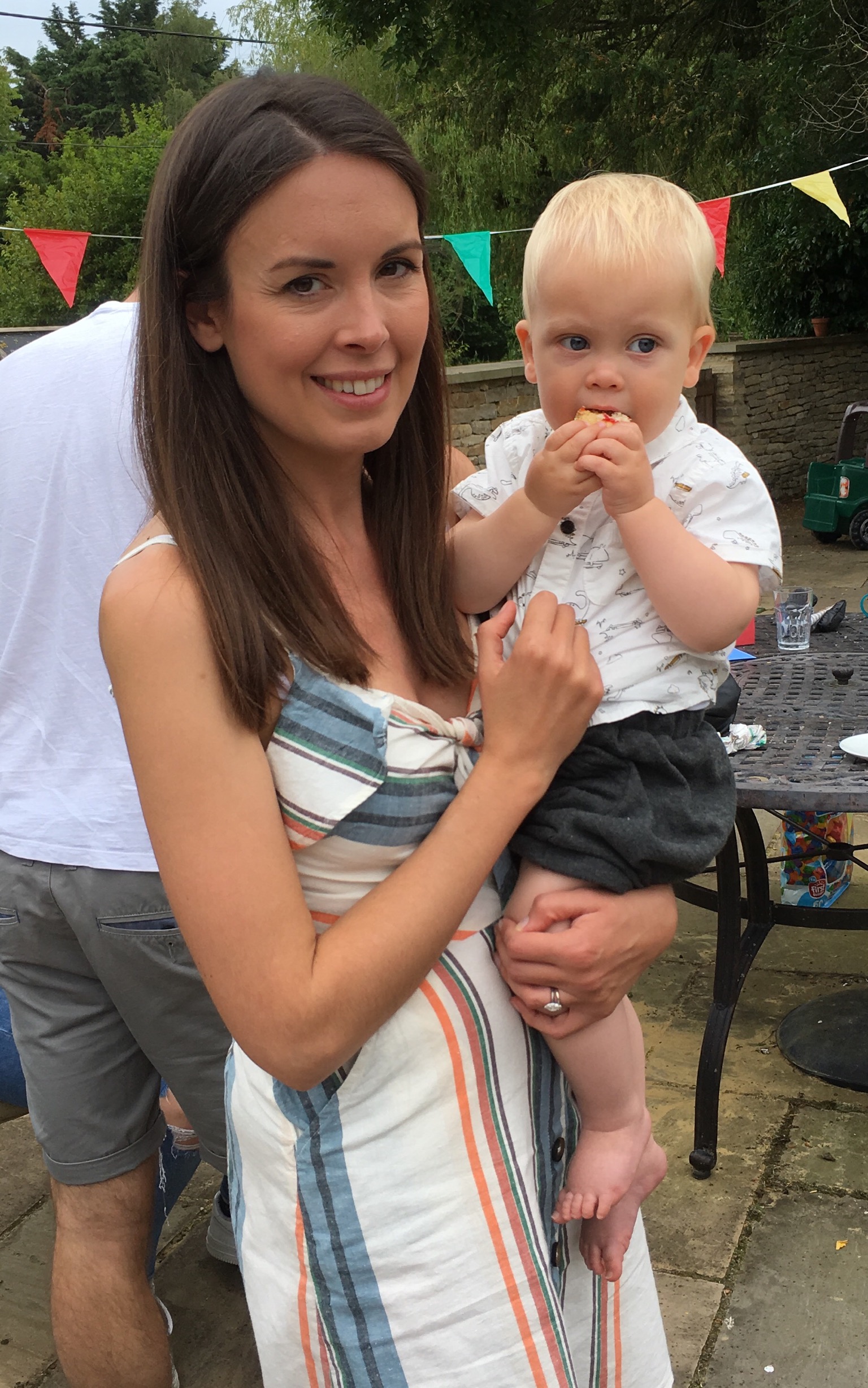 I am a creaky arthritic mum to two beautiful children, Imogen, aged three, and Zachary, who is just about to turn one. I wasn’t sure I’d ever end up at this point. Partly because of my arthritis and partly because my husband has had a lot of cancer treatment.

I remember a rheumatology nurse telling me I should get on with starting a family when I was 25. I couldn’t understand why, at the time, as I was nowhere near ready, but ten years on I can see how it would have been a lot easier, physically, back then!

Personally, I’m glad I waited and did so many other active things in my twenties, including traveling the world with my now husband. I haven’t had an easy time of it, becoming a mum, enduring loss, pain and depression but I wouldn’t change it for the world.

These are a few things I learnt along the way…

Plan for your conception!

That probably sounds obvious if you’re reading this but it wasn’t to me. As we didn’t think I’d get pregnant easily, we stopped using contraception after we were married but didn’t think much more about it. So much so that when I did first fall pregnant, I was convinced I had ovarian cancer! I thought I’d better take a test before going to the GP and we were utterly shocked to see a positive result.

Sadly, we lost this baby just before my 12-week scan. Of course, we’ll never know why. I’ve had two other miscarriages since actively trying for a baby but fortunately both others were early on and much less traumatic. After the second miscarriage we had all the usual tests and waited for six months for my body to recoup. Third time lucky! Nine months later my daughter, Imogen, was born.

Plan for your pregnancy!

This is a tricky one as you never quite know how you’ll be. Some mums with arthritis seem to go into full remission during pregnancy, others have a terrible time of it. I was somewhere in between. The disease certainly seemed a lot less active and after the usual early pregnancy symptoms had passed, I felt pretty good in myself. I kept telling people how great it was just to feel tired – like, normal tired, as opposed to the heavy shackles of fatigue I was used to. Of course, they all looked at me a bit strangely but it felt good to have a comparison to try to explain how I usually felt.

That said, I already had a lot of damage in my joints and spine and this caused more pain as I got heavier and my ligaments loosened. This was much worse in my second pregnancy where I had a lot of pelvic pain and used crutches now and again. I’ve always had these on hand, which was great for times when I felt I needed them.

For both pregnancies I attended an aqua-natal class – I can’t express how much I loved these sessions!! Warm water, taking off the weight and gently stretching was pure bliss. I also found them really relaxing and good preparation for labour, practicing breathing and generally zoning out! Both times I tried to convince my instructors to run these sessions for non-pregnant people so that I could keep going but again just got slightly odd looks.

Getting changed afterwards, having heaved yourself back onto dry land was often a bit of a challenge but I soon learnt that baggy clothes and flip flops did the job.

I finished work a good month before my due date and was glad I didn’t have that pressure to add to wielding my enormous stiff body around!

Related article: What to expect during pregnancy

Plan to make life as easy as possible

There seems to be so much to buy and do before expecting your first baby. There were the obvious things – a pushchair that’s light and easy to push, a standing changing station etc but lots of others I realised along the way.

One of the best gifts for my newborn baby was a washer/drier my dad bought us. Coping with copious amounts of washing is so much easier with a tumble drier, where I was having to hang washing out or up before.

A good sling/carrier was the best thing I ever bought. Of course, I was the mum with a severely degenerated spine and agonising shoulders, and had not one, but two babies who wouldn’t be put down at all! The cat got the best use of our Moses basket.

I started off with a material sling but found it pulled my shoulders forward. I ended up with an Ergobaby, which I find brilliant for carrying hands-free. I’d definitely recommend finding one that suits you, though of course I wish you a lying-down baby most of all!!

I used a baby bath that I could put in the kitchen sink with a change mat, towel etc on the worktop next to me which meant it was all at standing height, rather than having to bend over a bath.

My step-mum cooked us loads of meals for the freezer which were a God-send when we were too tired to do anything but stare at the walls.

Keep trying to make life as easy as possible!

With my first baby, I wanted everything to be perfect, I mean who doesn’t want the best for their child? Second-time-round, I’d set my goals much, much lower. I wanted to do whatever I could to make it as easy as possible!

Babies’ needs are pretty basic: food, warmth and most of all love. If you struggle breastfeeding, try a bottle. Can’t keep getting up in the night? Co-sleep. Food from a jar, a walk round the garden rather than buggy-fit? Who cares?

The mum-guilt will always get you, whatever you do, so make peace with it. Accept it’s a good thing you care so much to keep wanting more for your baby but you cannot do everything. So, accept help – as much as you can get and remember number one. You know you need to fit your own oxygen mask first… This is a lesson I learnt the hard way, which brings me to my next point…

Look after your mental health

I found that having a baby and being a parent is the HARDEST thing in the world. It’s also one of the best. You may have all your physical aids in place, your drugs lined up and tonnes of help. But, in my experience, I felt like I needed to wipe out my entire identity, adopt a new one, do a 24/7 job with no training or pay (I got lots of cuddles and a smile after a couple of months), endure sleep deprivation and that’s before waking up with a knee the size of an elephant’s!

Second time round I was much better prepared. Number one priority: sleep. I was due a good sleeper after my daughter who I thought was at the depressing end of the bad-sleep scale. I got my gorgeous boy, who still wakes up 6-10 times a night at nearly a year old.

I make a point of sleeping when he does nearly every day and we co-sleep at night. Some people love co-sleeping. I don’t. It worries me and I get stuck in all kinds of uncomfortable positions. But I do get a fair amount of sleep and for me, this is vital. I’ve been lucky enough not to be depressed this time round and I am certain this is why.

Some advice will be helpful, but not always!

People used to say to me ‘every baby is different’ and ‘you have to find what works for you’. ‘Of course,’ I’d say when what I really wanted was for someone to just tell me what to do!!! Sadly, when this did happen, it didn’t work out well. A friend said she never slept in the day, so I didn’t. Ref my point above…

Another said do whatever you need to but never ever leave the baby to cry. After 18 months of following this advice I was in a terrible state. I could barely function, let alone enjoy being with my daughter. So, we let her cry. Three nights of (un)controlled crying was the lesser of two evils at the time. I really didn’t want to do it but we had to consider the wider family’s needs and this was a horrible but necessary compromise.

So, you might choose to ignore everything I’ve written here and find your own way, as hard as that may feel. Everyone’s experience is different.

Having someone to talk to about babies is invaluable for a bit of adult company and camaraderie. Having a friend who understands what it’s like to be a mum and have a long-term condition is the holy grail. I met one of my best friends through NCT and she happens to have ME. We know what fatigue and pain is like, we know about pacing yourself and having to do things differently and that feeling of ‘we’ is such a relief when you’re at your wits end and no one else can understand. We message most days wishing each other good naps – us, not the babies (though of course the two go hand in hand)!

Going to local baby groups and activities is the easy way to meet other people. What isn’t so easy is getting on and off the floor. I kid you not, every single group involves floor lounging. With Imogen I’d lower myself down as subtlety as I could and sit in agony for an hour pretending to have a nice time. I’d had enough of that by the time Zachary arrived and now I ask for a chair. I feel a bit silly presiding over everyone else but I try not to care. Sometimes I tell people why, sometimes I make a joke about my throne and calling the fire brigade to get me up, sometimes I say nothing. The truth is nobody really cares and I can join in without seizing up.

You may have already swapped consultants a few times and figured out that just like the rest of us, they’re all different. It took me over 20 years to get diagnosed because my bloods were pretty insignificant only to have a major panic when after finally X-raying my back they thought I’d broken my spine in three places. That feeling of not being believed along with the loneliness of coping with an invisible illness was hard to take.

Meet other friendly folk with arthritis on Arthur’s Place Social, our Facebook Group

A few things I’ve learned about pregnancy and being a mum was last modified: November 15th, 2019 by Caroline Gaulton
FATIGUEFRIENDS AND FAMILYMENTAL HEALTHPAINPARENTINGPREGNANCYREAL LIFE STORIES

Caroline is 35 and has a diagnosis of Seronegative Spondyloarthropy affecting all her joints. She also had JIA, hip dysplasia, Perthes Disease and Scheuermann’s Disease as a child. Caroline had a difficult journey getting diagnosed with most of the above only being confirmed around 5 years ago. She works in health and social care, is married and is Mum to two young children and a cat!